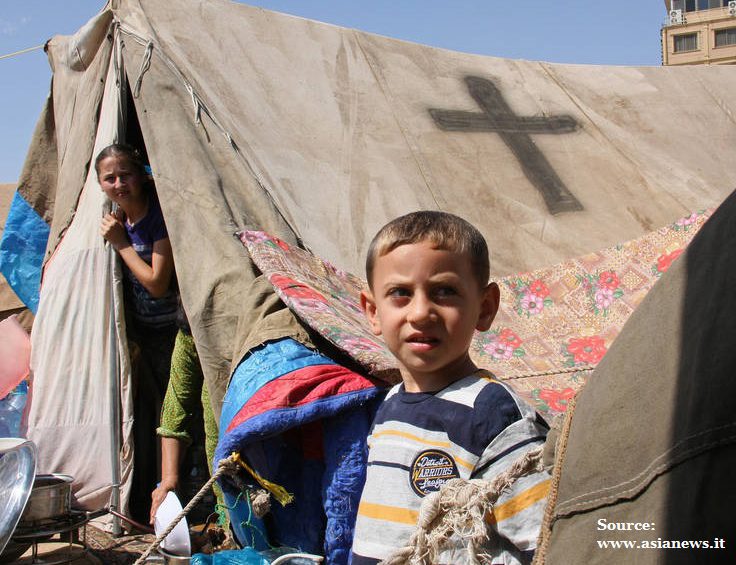 On behalf of the World Council of Arameans (Syriacs) and its Member Federations, some of whom are present today, I would like to thank the EPP Group and the Aramean Movement for Human Rights for inviting me to this important conference in order to represent the voice of the forgotten, marginalized and voiceless Aramean Christians of Syria and Iraq.

Conference on “The Alarming Situation and Persecution of Aramean Christians” European Parliament in Brussels, Belgium 25 May 2016. Statement by Johny Messo. Download here the PDF file

Now these are real stories, experiences and daily realities of the vulnerable Aramean Christians of Syria and Iraq.

RESPONSE INTERNATIONAL COMMUNITY
With respect to the Arameans of Syria and Iraq, dear friends, I regret to state that Western media, politicians and NGOs have largely responded with deafening silence and indifference to their ongoing genocides, human rights violations and humanitarian needs. I will mention only two areas, which show the world’s weak response and lack of responsibility in helping the Arameans stay in their homeland.

First, the lack of political support: Arameans have no legal status in their home countries and they are not recognized as a people. We believe recognition is critical for the survival of the Arameans, because it will lead to international awareness, a voice and tangible support. Just a few days ago, I was asked by an Aramean woman from Syria who found refuge in Sweden: “How come armed groups and foreign nations are invited to the Syrian peace talks, while the original citizens of the country are not allowed to take part in such discussions which also determine the future of the Aramean homeland and society?” Different reasons can be given for the absence of appreciation of and support to the Aramean people, but I believe that at its core lies the lack of awareness and recognition of this stateless Semitic people.

Secondly, the absence of humanitarian aid programs: In the last years, the World Council of Arameans (Syriacs) and its Member Federations have knocked on so many doors of governments and NGOs, most of which unfortunately have remained closed for various reasons. Reasons that, again, did not pertain to bureaucracy. How often have we not heard governments and NGOs, even Christian NGOs, say that they cannot help the Arameans, even if they need urgent aid, because they are Christians and a perceived religious discrimination and preferential treatment are to be avoided?

Furthermore, in the last five years we have frequently experienced that the big NGOs seemed too busy, unwilling or indifferent to adapt their humanitarian aid programs in order to also provide urgent help to the neglected Aramean IDPs in Syria and Iraq as well as to the forgotten Aramean refugees who still do not dare to seek shelter in UNHCR refugee camps out of fear for their Muslim compatriots.

After many months of intensive cooperation between the World Council of Arameans (Syriacs), its Member Federation of the Arameans in Germany and the Syriac Orthodox Patriarchal Relief Committee in Damascus, the German Foreign Ministry decided in September 2012 to support our joint request to set up a humanitarian aid program for the Aramean Christians in the Damascus region. This project proved so successful, as it helped more than 1,000 Christian and Muslim families per month, that we continued our efforts for the Arameans of Mosul in Iraq and Homs in Syria. Thankfully, these regions were also granted generous support by the German Government. Until today, it is the only government in the world which structurally aids the Aramean Christians in these two war-torn countries.

I mention this exception, because Germany has set the example and has demonstrated that where there is a will, there is always a way. We are very happy with the participation of and the moral support given by the Dutch Foreign Minister earlier today. We hope that Mr. Koenders and the Dutch Government, too, as well as other EU Member States, will be willing to find a way to help the Aramean Christians. In November 2015, we presented a petition to the Dutch Foreign Affairs Committee concerning urgent aid to the vulnerable Aramean minority of Syria and Iraq, while a motion did not receive support from the Dutch Parliament, including the ruling parties. We will ask Mr. Koenders to support this petition.

WHY HELPING ARAMEAN CHRISTIANS?
Let us be clear, all populations in Syria and Iraq suffer tremendously. At the same time, however, the world often calls upon countries to protect the vulnerable communities and to grant them humanitarian aid. For instance, the Geneva communiqué from June 2012 on Syria or last year’s International Conference on the Victims of Ethnic and Religious Violence in the Middle East in Paris stressed that the international community has a duty to “protect the members of those threatened communities, which are particularly vulnerable.” Again, the native Arameans of Syria and Iraq, who are a vulnerable and threatened minority in need of aid, were not allowed to participate in or attend this conference.

Despite such clear language and good intentions, the vulnerable and threatened communities of Syria and Iraq are rarely identified or mentioned by name in such documents. This affords governments and NGOs room for arguing that all populations suffer equally, without acknowledging or even showing a readiness to examine whether the Aramean Christians – who do not need or ask for help just because they are Christians – qualify as a vulnerable group whose existence in their homeland is in danger today.

The UN Human Right Council’s Commission of Inquiry on Syria already acknowledged that Syria’s Christian minority is facing an “existential threat,” unlike Syria’s majority Sunni, Alawite, Kurdish and even Palestinian groups, all of whom number in the millions and who receive much state support from friendly nations. The indigenous Arameans of Syria and Iraq, however, are decimated, stateless and defenseless. Unlike other groups, they hardly receive any (state) support. Clearly, helping this vulnerable minority should not be an option to think about tomorrow, but an urgent necessity to act upon today!

RECOMMENDATIONS
Despite the lack of tangible and structural support to the Arameans, there seems to be a growing will to aid them. To reiterate my earlier premise, the basis of international aid will follow when the Aramean people, challenges and needs will be officially recognized by politicians and translated into declarations and resolutions, which then can be implemented by the necessary departments and public servants.
Arameans are thankful for the joint motion for a resolution “on the systematic mass murder of religious minorities by the so-called ‘ISIS’,” which was adopted by the European Parliament almost four months ago. It forms a good basis, but much more is needed. Therefore, we recommend that:

FINAL REMARKS
In the last decades, the World Council of Arameans (Syriacs) has organized, attended and participated in many conferences concerning the deteriorating situation of the Aramean people in the Middle East. We regret to conclude that we in the West have been talking about burning issues in the Middle East, while the vulnerable minorities on the ground have received little to no help and consequently tens of thousands of Arameans have joined – and continue to join – their fellow people in the West.

Today we must be ready to acknowledge our past negligence and take lessons from our past inaction. While we have all the time of the world to talk about plans, proposals and strategies, the Arameans do not have the luxury of time. They cannot wait for us to consider sending them water, food, medicine and other basic necessities for their survival. Hopefully this conference will help make a real difference and change the worsening reality on the ground for the final remaining Arameans in Syria and Iraq.

We request your urgent help to ensure that they remain in their homeland and continue their role as peace makers, cultural entrepreneurs and ambassadors who carry the values and ideals that were the foundation for Western civilization. Imagine how good you would feel, if the EU would take a leadership position on the critical issue of their survival and implement short, medium and long term objectives to secure the future of the indigenous Aramean people in Syria, Iraq and Turkey. If we don’t act today, tomorrow it will be too late…