Although I was born (7 February 1978) in Hengelo, the Netherlands, my family originates from Midyat in Tur-Abdin. This word means “the Mountain of the Servants (of God)” in Aramaic and is the name of the until recently heavily populated Aramean region in Southeast Turkey.

Until the age of 17, however, I did not speak, read or write the Aramaic (Syriac) mother tongue of my parents. I did not join a church or a cultural association and did not know anything about my identity. I just did not have any interest in knowing more about such matters either.

Then, quite unexpectedly, all changed in 1995 after attending a Bible study. The teacher introduced us to our church fathers and other riches of our cultural heritage. Once the veil of ignorance was lifted, I was filled with a sense of pride, honor and belonging to a great people.

This experience made me thirst for more knowledge about our fascinating history and identity. And so the search for my roots started. 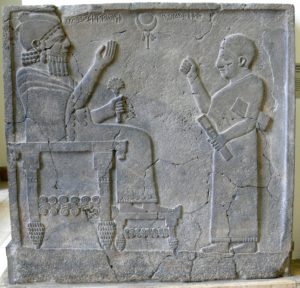 Upright stone from 730 BC from Sam’al (Zincirli in South-Central Turkey). Aramaic phrases above the Aramean King (“I am Bar-Rakkab, son of Panamuwa”) and his scribe (“My lord is the Ba’al of Harran”).

As soon as I realized that Arameans are proud of an awesome past, while struggling for survival and fearing an uncertain future, I decided to dedicate my life to help raise their voice by defending and promoting their interests, needs and challenges. I discovered that working for my people was my destiny. It felt rewarding and it gave meaning to my life. That is why I chose to study Theology at the Evangelical Theological Highschool in Veenendaal and then Hebrew and Aramaic Languages and Cultures at Leiden University.

For more than 20 years now, serving the Aramean people and their cultural heritage has made my heart sing. It has made me feel like doing something unique, important and crucial. Because their existence is threatened, every form of service in their interest is very much needed and appreciated.

“Reading, speaking and writing about past, present and future questions regarding the Aramean (Syriac) Christians of the Middle East is my passion and my calling.” 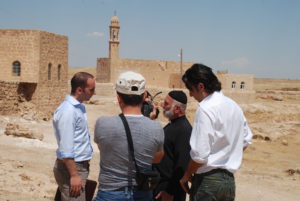 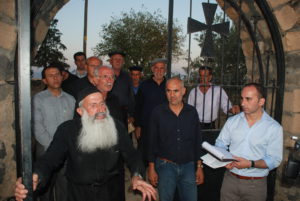 Interviews (ongoing) land confiscation in the town of Midin in Tur-Abdin; this local priest later passed away

Role of My Family in the Netherlands

My dad’s father, Joseph, was the first Aramean who left Midyat for Switzerland in 1961; a year later, he returned home. Arriving in Hengelo in 1965, my mom’s father, Hanna Kulhan (Challma; 1926-2018), settled as the first Aramean from Turkey in the Netherlands and in 1969 he would be reunited with his family.

My parents, David and Ayten, were the first Arameans who got married in the Netherlands on 29 March 1973. Maikel, Tony and James are my three younger brothers; they are always ready to support me when I need them. On 9 June 2017, God blessed me with a dream wedding with the woman of my dreams, Teodora; she is a lawyer by profession from Mainz, near Frankfurt. Since 15 March 2018, our lives have been enriched and further blessed by our beautiful daughter Marie-Sofie Simona. In December 2019, we moved to Germany where we enjoy our lives in the wonderful city of Cologne. 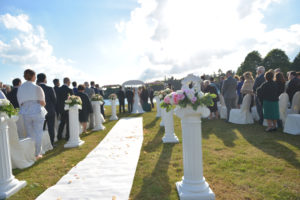 This is not easy to capture in a word or phrase. I have the honor and privilege to serve a great people that is in need of both your and my service. The kind of work I do for the Aramean people as the WCA president can perhaps best be described as a combination of these roles: a leader, diplomat, politician, human rights activist, speaker, writer, event organizer and more. A random selection of some photos should give you a small impression.

Since 1983, the World Council of Arameans (Syriac) (“WCA”) is the worldwide umbrella federation of the Aramean people and since 1999 it also acts as an NGO in special consultative status with the United Nations. 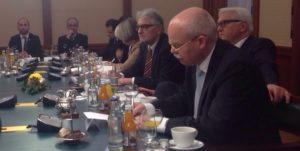 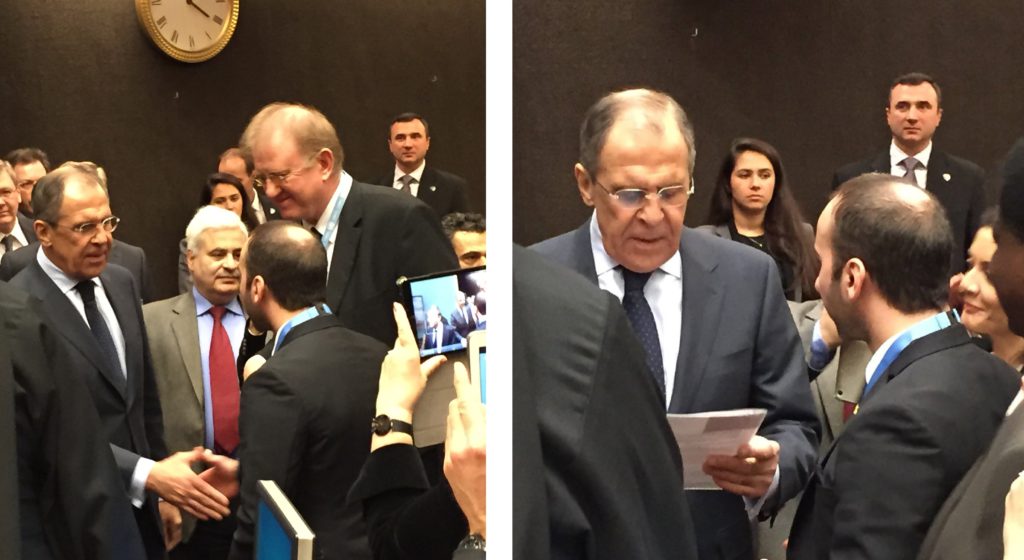 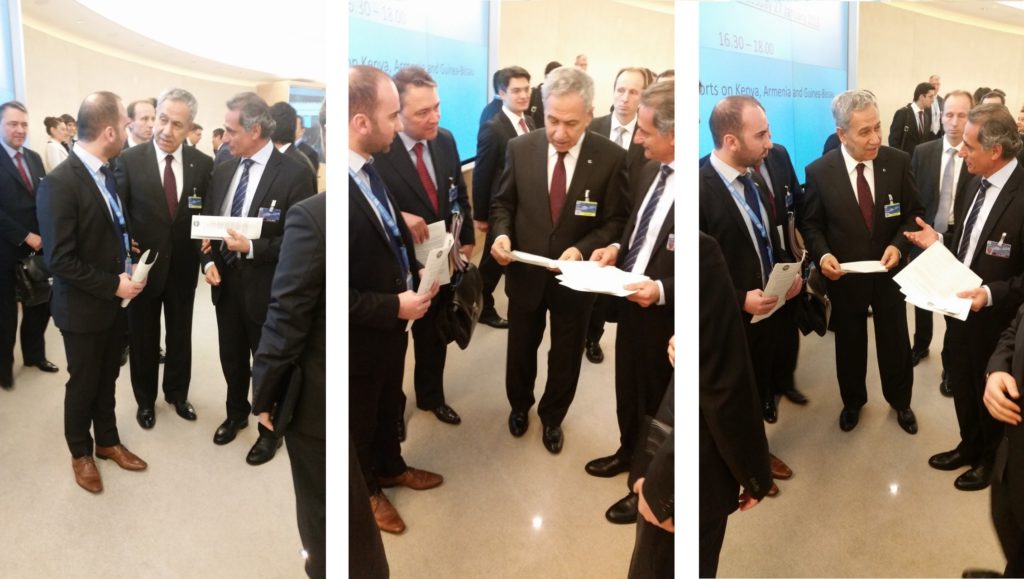 Welcoming at Syriac Orthodox Church in Cologne then Foreign Minister & meeting in The Hague with then Prime Minister of Turkey, Ahmet Davutoğlu

Meeting with and presenting the flag of Syria’s indigenous Aramean people to Muhsen Bilal, then Syria’s Minister of Information | Damascus

Statement at Global Forum “Against the Crime of Genocide” in Yerevan on 22-23 April 2015 | I greeted many prominent people, incl. Armenia’s Foreign Minister Eduard Nalbandyan (photo) and Russian President Putin 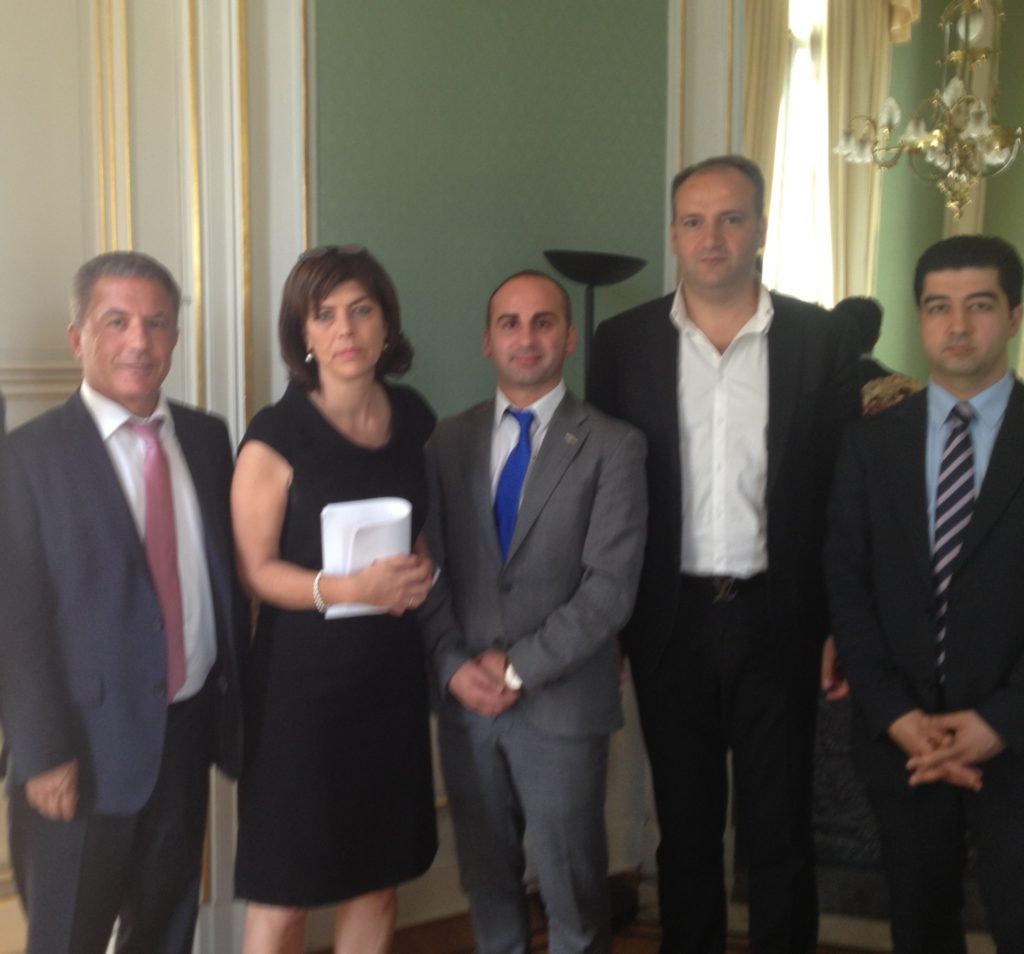 After his speech, chat with Péter Szijjártó, Hungary’s Minister of Foreign Affairs and Trade | Budapest

Moderated an event co-organized by WCA | UN Office in Geneva 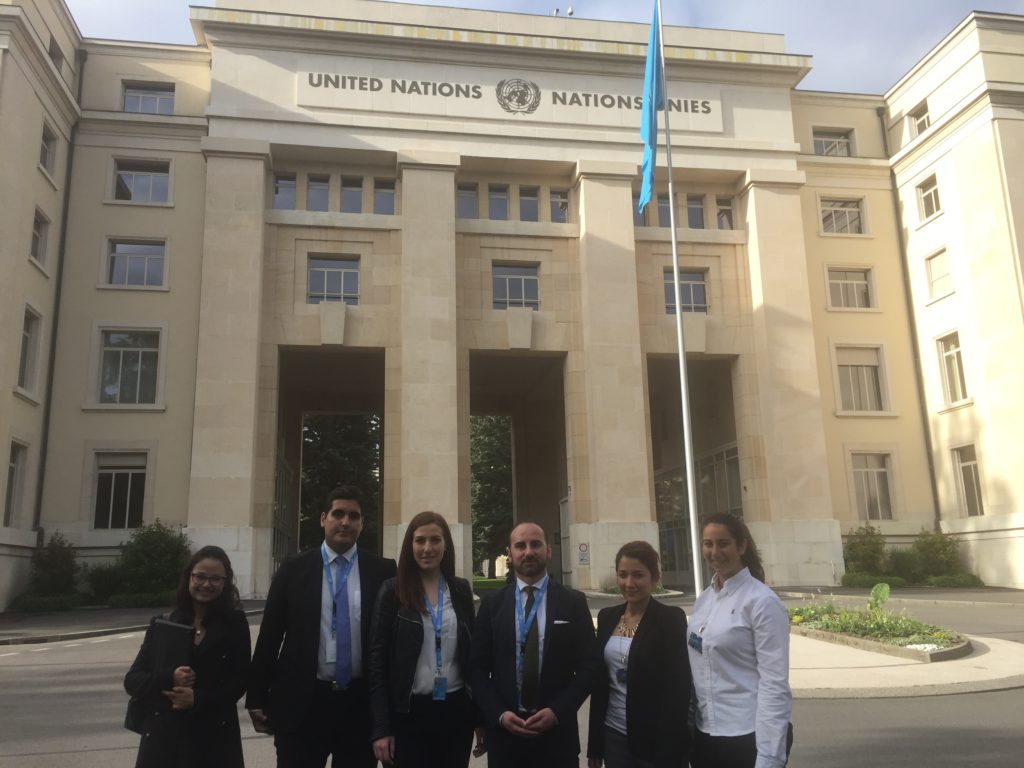 Proud of the WCA Delegation to the United Nations Office in Geneva / on the right photo and right of me is our Aramean (Syriac Maronite) friend and then guest speaker from Israel, Shadi Khalloul Risho

Meeting with His All Holiness Bartholomew I, Archbishop of Constantinople, New Rome, and Ecumenical Patriarch | Istanbul 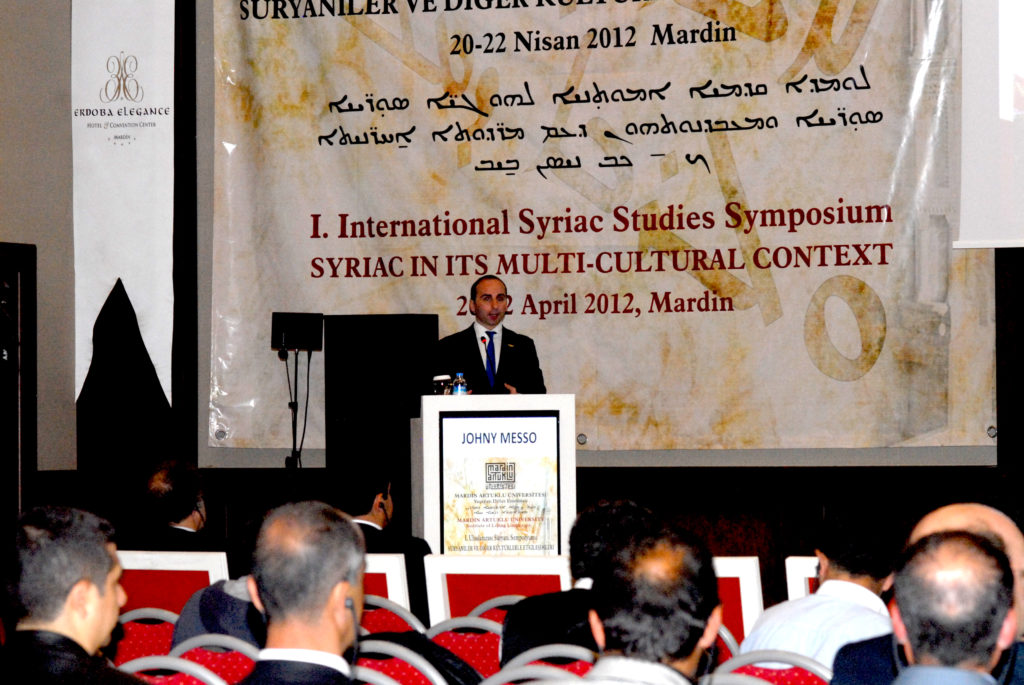 WCA Australia hosted both talks in Sydney and other events 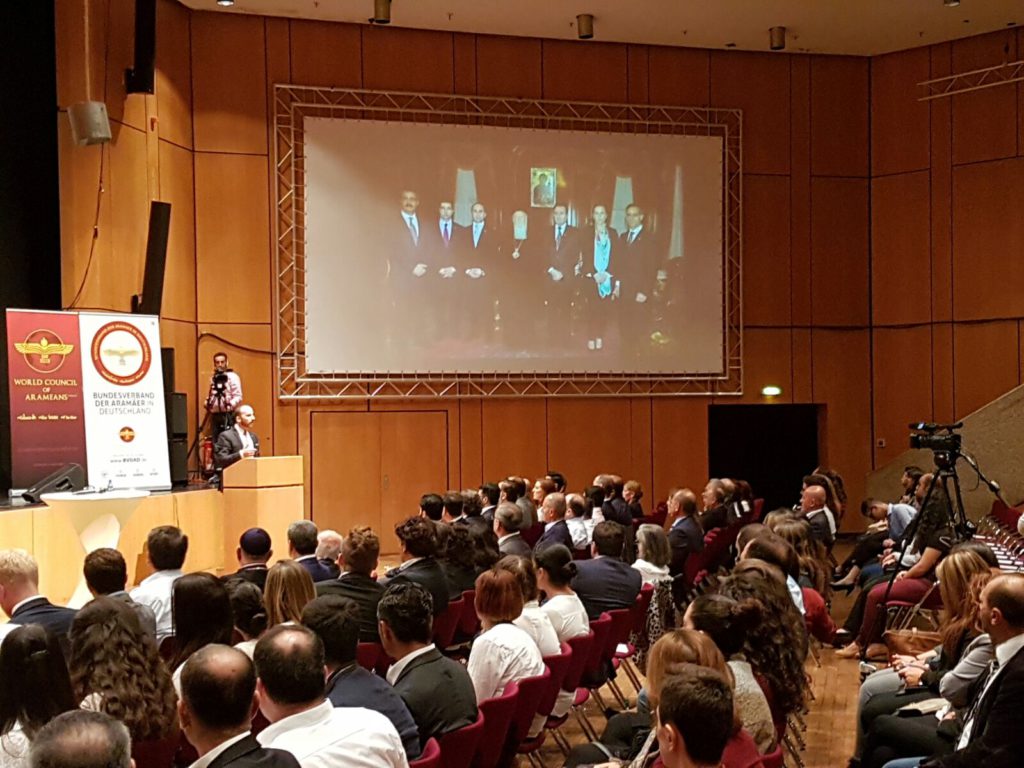 During a live broadcast of Suryoyo Sat | Ahlen, Germany 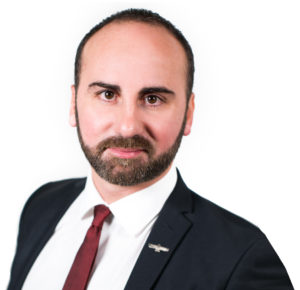 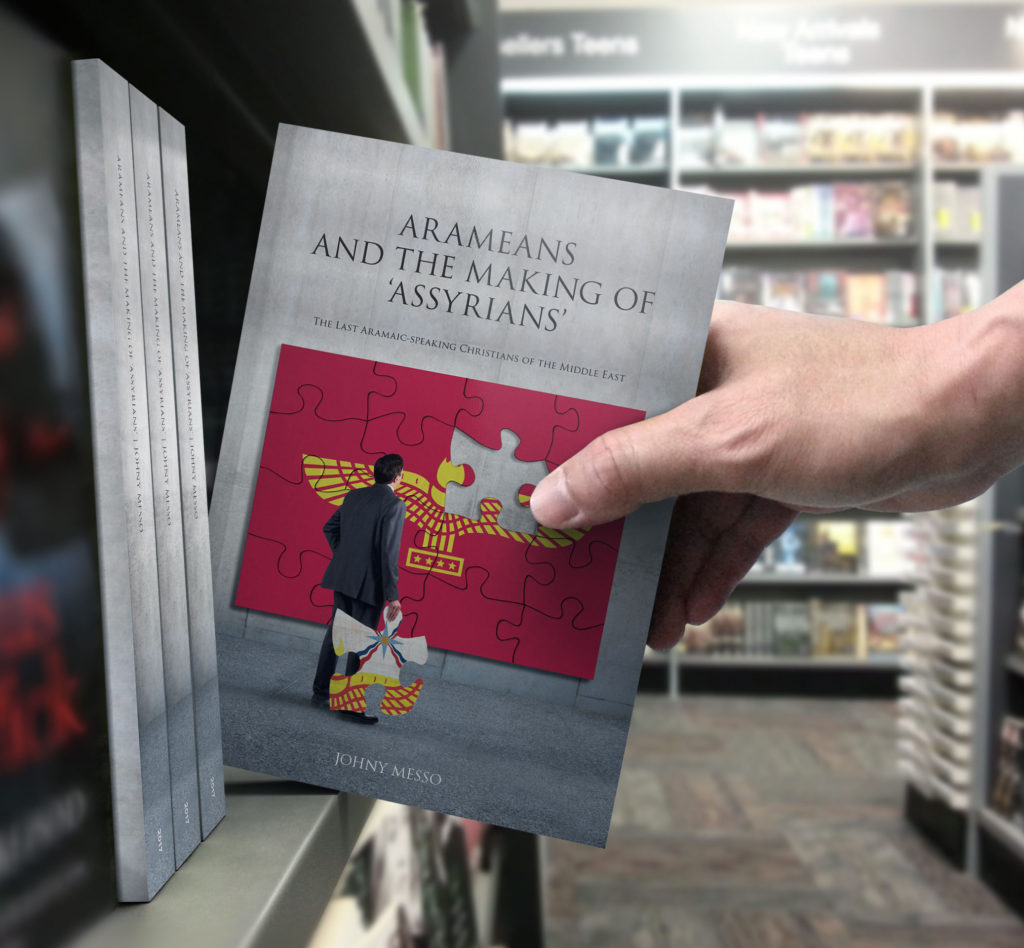